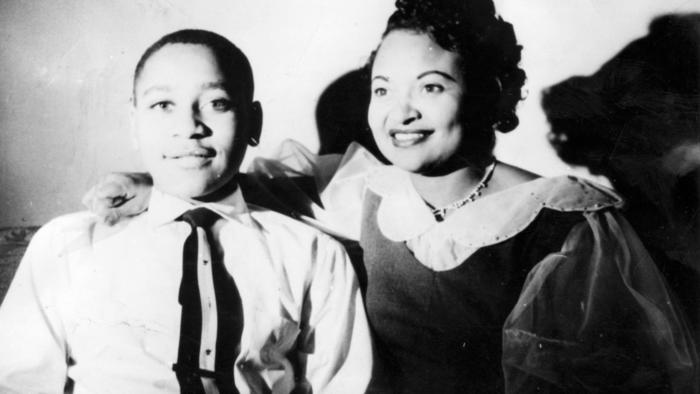 The first time I learned about Emmett Till I was in fourth grade, which is now thirty years ago. I have never once stopped feeling a slight cold wave over my chest at just hearing his name. If it’s more–if it’s a story, a photo, even a painting–that cold wave can turn into a claustrophobic despair, a suffocating rage or a roaring blackness.

It is impossible for me to be unmoved by Emmett Till, and maybe that’s a personal overabundance of empathy. Maybe that’s being a black american woman. Maybe those are the same thing.

Maybe that’s why Zadie Smith’s recent essay in Harper’s Magazine left me cold. She starts with a critical analysis of the movie Get Out, and some of those themes of otherness are universal throughout the African diaspora. But she misses the mark using it as a springboard to examine and ultimately dismiss the controversy surrounding the Whitney’s decision to exhibit “Open Casket,” a piece by a white artists where Till’s ravaged face is the subject.

The similarities between the film Get Out and the events of Till’s murder are obvious,  (kidnapped and tortured by white men on a flimsy lie from a white woman), and it would be worth exploring where the similarities diverge (spoiler alert: in Get Out, the white people die and the black man survives). But Smith blurs the focus midway through, and moves away from media critique to first a broader defense of artistic freedom, then a treatise that racism is solvable by inter-race adoptions, and finally a dismissive verdict on Schutz’s painting that seems improbable to this black american (“I turned from the painting, not offended, not especially shocked or moved, not even terribly engaged by it”).

Given that the major export of the united states has been culture, a culture in large part owed to enslaved black americans and their descendants, Smith’s statement actually works better in reverse: it is white americans who are considered american despite their origin and self-segregation efforts, despite their efforts to exterminate the original inhabitants of the land.

Writers should ask themselves, “does this hurt someone? Do I mean to hurt that person? Does the purpose earn its pain?” The answers to all of those questions can be yes, and the piece can still be good, can be necessary, can be brilliant. But the question should be asked. Why didn’t Smith ask that question? If she did, and she felt that it was unharmful to dismiss the concern that black americans have with a uniquely black american tragedy–one that is in the living memory of many–that is a fault of her curiosity and analysis.

I am a fan of Smith’s. I am humbled by her talent and the number of true things she says, beautifully. In this essay, I believe that everything she said was true and honest to her viewpoint. I only wish she had reconsidered who it would damage (what damage it would do) to say it.